Reprinted with permission of Jon Becker, Published 1:39 am EDT, Thursday, July 12, 2018 for the Midland Daily News.

The Auburn-Williams Township Fire Department has a history dating all the way back to 1949 of protecting the community as an all-volunteer-based organization. It is Bay County’s last remaining such fire department. 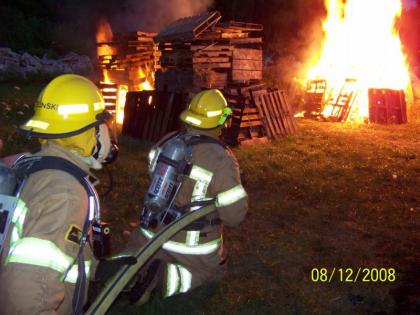 Now Auburn and Williams Township leaders are going to voters during the Aug. 7 primary election to seek a fire protection personnel expense millage because the communities have outgrown the current 35-member volunteer staff that can’t keep pace with the increasing number of medical and fire calls they are required to respond to.

“We have a long tradition of volunteerism here that we’re proud of,” said John Martinski, Auburn-Williams Township fire chief. “The reality, though, is that the city and township have outgrown a volunteer fire department. We’re missing calls. As a fire service, we can’t be missing calls. For nearly 70 years we’ve never asked the community for anything. Now we’re asking for help so we can help them.”

Williams Township Supervisor Paul Wasek said the department missed 47 calls in 2017. In all, the department is receiving more than 600 medical and fire calls a year, compared to the maybe 50 calls a year it received during the early 1950s. An aging population is certainly a factor in the growing number of calls. Last year, 397 calls were medical-related, officials noted.

“We hate missed calls,” he said. “People are busy, they’re working. We didn’t have the daytime concerns a few years back that we do now. Between 6 a.m. and 6 p.m. is when we receive a good share of our calls.” According to Martinski, seeking millage funding is the department’s only option.

“Most of my firefighters don’t work in this area and employers seem more reluctant to let volunteers respond to calls these days,” Martinski said. “It’s unheard of these days to operate strictly an all-volunteer department. We brought in a consultant, who told us this isn’t a problem limited to Auburn. It’s a nationwide problem.

There will be two ballot questions — one for the City of Auburn seeking 2 mills and one for Williams Township seeking 1 mill. The city, said Martinski, is seeking a larger millage because it’s geographic area covers just over one square mile and won’t generate nearly the property tax revenue of the township with its nearly 35 square miles of total taxable value. The municipalities are seeking a 6-year millage.

The township’s one mill levy would generate about $182,000 per year, Wasek said. The money, officials said, will be used solely for personnel expenses. If the millage passes, the plan is to add two certified medical first responder/firefirefighter paid part-time positions to cover daytime hours. The other firefighters would receive a stipend when they respond to a call.

The millage is necessary to provide the neighboring communities the professional services they expect and need, Martinski said.

“We didn’t want to make the massive leap from going from a volunteer department to a full-time staff,” Martinski, who has been fire chief since 2011, said. “We think the voters will be more receptive to this model.”

He added: “Our current daytime response is, on average, about 11 minutes. A millage will allow us to have the staff at the station during the day and would cut it down to a four-minute average.”

Martinski assures residents that quality will not suffer with part-timers.

“They’ll be true, certified responders/firefighters,” he said. “We don’t want people to think otherwise just because they are part-time.” If the millage passes, the cost would be reflected on homeowners’ 2019 property tax bills. One mill will levy $1 of tax per every $1,000 of taxable value. Both Wasek and Martinski are confident voters will support the millage request.

“We’ve got everything moving in the right direction,” Wasek said. “I don’t think getting support from the community is going to be an issue.”

“We’ve done a good job of staying engaged with our community in a number of ways,” Martinski said. “I think it’ll go over pretty well. We’ve been providing a quality service since 1949 and, until now, have not asked for any kind of help.”

Why do we need a millage for the fire department Personnel?

Since the beginning of the Auburn Williams Fire Department in the early 50s, the department was an all-volunteer-based organization. In the beginning, there were perhaps 50 calls a year, however the number of calls has increased rapidly over the last few years as the communities have grown adding more homes, condos, and businesses. In 2017 there were over 600 calls of which 397 calls were medical related. To continue making the medical calls, the funding from the millage is required. The State requires all departments with a Medical First Responders license to respond to all medical calls 24-7 by certified medical first responders.  If this requirement is not met, the state can revoke our license. Work and family commitments have made it more difficult for the volunteer fire fighters to respond during the daytime hours.  The choice is to continue to have the Auburn/Williams Medical First Responders or for our residents to wait until an ambulance from somewhere in the county to come to provide aid. With part-time fire fighters at the station during the week, working day time hours, the Auburn-Williams Fire Department can provide faster response time improving the average response from 11 minutes to about 4 minutes, minutes can matter in a life-threatening emergency. To continue to provide the communities with the professional service they expect and need, it is proposed to add certified Medical First Responder/Fire Fighter part-time paid positions during the daytime hours.  That is why the City and the Township is asking for the “Fire Protection Personnel Expense Millage.”

How much will it cost me to support the personnel of the Auburn Williams Fire Department?

How is the Auburn-Williams Fire Department currently funded?

Currently the fire department is funded by the City and the Township. Each municipality funds a percentage of the total operating budget from their general fund.  When the agreement to create a joint fire department between the City and Township was executed, a formula based on taxable value, population and total runs was created to determine the percent each community contributes for the fire department expenses. The proposed millage is not for operating expenses it is solely for personnel related expenses such as payroll and payroll expenses. The current AWFD operating budget will continue to be funded as is by the City and the Township.

What will the part-time fire fighters do, while being at the station during the day-time shifts?

Although they are at the station to respond to fire and medical calls, there is a lot of work that they can do  during their shifts. Record keeping, doing fire protection training at the schools, performing truck checks, equipment checks, hose testing, pre-plan fire safety programs, building upkeep are only a few examples of what they will be tasked to do.

What does it take to be a Fire Fighter/First Responder?